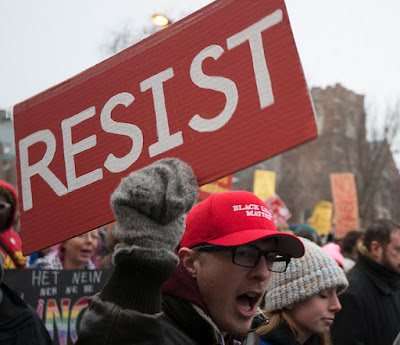 The Cost of Resistance
Chris Hedges

Resistance entails suffering. It requires self-sacrifice. It accepts that we may be destroyed. It is not rational. It is not about the pursuit of happiness. It is about the pursuit of freedom. Resistance accepts that even if we fail, there is an inner freedom that comes with defiance, and perhaps this is the only freedom, and true happiness, we will ever know. To resist evil is the highest achievement of human life. It is the supreme act of love. It is to carry the cross, as the theologian James Cone reminds us, and to be acutely aware that what we are carrying is also what we will die upon.

Most of those who resist—Sitting Bull, Emma Goldman, Malcolm X and Martin Luther King Jr.—are defeated, at least in the cold calculation of the powerful. The final, and perhaps most important quality of resistance, as Cone writes, is that it “inverts the world’s value system.” Hope rises up out of defeat. Those who resist stand, regardless of the cost, with the crucified. This is their magnificence and their power.

The seductive inducements to conformity—money, fame, prizes, generous grants, huge book contracts, hefty lecture fees, important academic and political positions and a public platform—are scorned by those who resist. The rebel does not define success the way the elites define success. Those who resist refuse to kneel before the idols of mass culture and the power elites. They are not trying to get rich. They do not want to be part of the inner circle of the powerful. They accept that when you stand with the oppressed you get treated like the oppressed.

The inversion of the world’s value system makes freedom possible. Those who resist are free not because they have attained many things or high positions, but because they have so few needs. They sever the shackles used to keep most people enslaved. And this is why the elites fear them. The elites can crush them physically, but they cannot buy them off.

The power elites attempt to discredit those who resist. They force them to struggle to make an income. They push them to the margins of society. They write them out of the official narrative. They deny them the symbols of status. They use the compliant liberal class to paint them as unreasonable and utopian.

Resistance is not, fundamentally, political. It is cultural. It is about finding meaning and expression in the transcendent and the incongruities of life. Music, poetry, theater and art sustain resistance by giving expression to the nobility of rebellion against the overwhelming forces, what the ancient Greeks called fortuna, which can never ultimately be overcome. Art celebrates the freedom and dignity of those who defy malignant evil. Victory is not inevitable, or at least not victory as defined by the powerful. Yet in every act of rebellion we are free. It was the raw honesty of the blues, spirituals and work chants that made it possible for African-Americans to endure.

Resistance requires eternal vigilance. The moment the powerful are no longer frightened, the moment the glare of the people is diverted and movements let down their guard, the moment the ruling elites are able to use propaganda and censorship to hide their aims, the gains made by resisters roll backward. We have been steadily stripped of everything that organized working men and women—who rose up in defiance and were purged, demonized and killed by the capitalist elites—achieved with the New Deal. The victories of African-Americans, who paid with their bodies and blood in making possible the Great Society and ending legal segregation, also have been reversed.

The corporate state makes no pretense of addressing social inequality or white supremacy. It practices only the politics of vengeance. It uses coercion, fear, violence, police terror and mass incarceration as social control. Our cells of resistance have to be rebuilt from scratch.

The corporate state, however, is in trouble. It has no credibility. All the promises of the “free market,” globalization and trickle-down economics have been exposed as a lie, an empty ideology used to satiate greed. The elites have no counterargument to their anti-capitalist and anti-imperialist critics. The attempt to blame the electoral insurgencies in the United States’ two ruling political parties on Russian interference, rather than massive social inequality—the worst in the industrialized world—is a desperate ploy. The courtiers in the corporate press are working feverishly, day and night, to distract us from reality. The moment the elites are forced to acknowledge social inequality as the root of our discontent is the moment they are forced to acknowledge their role in orchestrating this inequality. This terrifies them.

The U.S. government, subservient to corporate power, has become a burlesque. The last vestiges of the rule of law are evaporating. The kleptocrats are pillaging and looting like barbarian hordes. Programs instituted to protect the common good—public education, welfare and environmental regulations—are being dismantled. The bloated military, sucking the marrow out of the nation, is unassailable. Poverty is a nightmare for half the population. Poor people of color are gunned down with impunity in the streets. Our prison system, the world’s largest, is filled with the destitute. And presiding over the chaos and the dysfunction is a political P.T. Barnum, a president who, while we are being fleeced, offers up one bizarre distraction after another, much like Barnum’s Feejee mermaid—the head and torso of a monkey sewed to the back half of a fish.

There is no shortage of artists, intellectuals and writers, from Martin Buber and George Orwell to James Baldwin, who warned us that this dystopian era was fast approaching. But in our Disneyfied world of intoxicating and endless images, cult of the self and willful illiteracy, we did not listen. We will pay for our negligence.

Søren Kierkegaard argued that it was the separation of intellect from emotion, from empathy, that doomed Western civilization. The “soul” has no role in a technocratic society. The communal has been shattered. The concept of the common good has been obliterated. Greed is celebrated. The individual is a god. The celluloid image is reality. The artistic and intellectual forces that make transcendence and the communal possible are belittled or ignored. The basest lusts are celebrated as forms of identity and self-expression. Progress is defined exclusively by technological and material advancement. This creates a collective despair and anxiety that feeds and is fed by glitter, noise and false promises of consumer-culture idols. The despair grows ever-worse, but we never acknowledge our existential dread. As Kierkegaard understood, “the specific character of despair is precisely this: it is unaware of being despair.”

We are in the grip of what Kierkegaard called “sickness unto death”—the numbing of the soul by despair that leads to moral and physical debasement. Those who are ruled by rational abstractions and an aloof intellectualism, Kierkegaard argued, are as depraved as those who succumb to hedonism, cravings for power, violence and predatory sexuality. We achieve salvation when we accept the impediments of the body and the soul, the limitations of being human, yet despite these limitations seek to do good. This burning honesty, which means we always exist on the cusp of despair, leaves us, in Kierkegaard’s words, in “fear and trembling.” We struggle not to be brutes while acknowledging we can never be angels. We must act and then ask for forgiveness. We must be able to see our own face in the face of the oppressor.

The theologian Paul Tillich did not use the word “sin” to mean an act of immorality. He, like Kierkegaard, defined sin as estrangement. For Tillich, it was our deepest existential dilemma. Sin was our separation from the forces that give us ultimate meaning and purpose in life. This separation fosters the alienation, anxiety, meaninglessness and despair that are preyed upon by mass culture. As long as we fold ourselves inward, embrace a perverted hyper-individualism that is defined by selfishness and narcissism, we will never overcome this estrangement. We will be separated from ourselves, from others and from the sacred.